Level Four: Its Own Little World

We're in a maze. It operates like all the other mazes we've been in, but something about it feels off. The hallways are depicted as curving, yet we're stuck with the usual left/right/forward/back directions. Mercifully, we can't stay lost for long, as we bump into a PoP not long after arriving. Perhaps this will grant us some perpsective.

The creature is hurrying somewhere; its destination is not apparent. "I'm late, I'm late," it is muttering. "Throckmorton'll put me on report. Damn."

Not a bad idea, Iggy. This guy hardly looks threatening enough to be one of the Mad One's most dangerous guardians, after all.

The creature barely glances at you. "No time, no time," it says.

Oh, I'm afraid I have to insist.

"I say, it's really quite important. I understand you have a schedule to keep, but I just want a minute of your time."

The creature ignores you and strides onward. You have to trot to keep up.

Maybe we can offer a little... incentive?

Threats: "If you do not help me, I shall kill you," you say.

The creature halts in its tracks. "Yes? How may I assist you?"

Now that's more like it. Let's ask some questions.

The Mad One: "Huh?" it says. "Oh, over on the other side of the moon. Everybody knows that."

This Maze: It seems a little uncomfortable with the request. "Uh, yeah, okay... the Library's probably around here somewhere." "That's all?" you say. "Yeah," it says defensively.

But if we ask about our quest or Moraziel...

Threaten It: It looks every which way, trying to see how it might escape you and your horrible, big weapon. It whines in fear. It is absolutely terrified. It looks as if it is doing its level best to forget how to talk.

Offer Money: "How much money?" it says, briefly interested. Then, "No, no, forget I asked. No amount of money is worth eternity in the Stuff of Madness. No way. I ain't talking."

This is turning into a bit of a bust. We could kill it easily, but then we'd get nothing out of it. What do you think, Iggy?

"This doofus isn't going to talk."

"Who you calling doofus, nimnose?" says the creature.

Hold on a second, we absolutely can do that! Let's test out the Talisman.

The creature is desperately trying not to think about the information you want. This means that you can pluck it right out of its mind. Moraziel and the Mad One exist within the Seat of Madness, the entrance to which lies somewhere on the opposite side of the moon. The creature doesn't know exactly where; probably the only one who does is the General.

(The what? You don't get a good image from the creature's mind.)

Other terrifying monsters with huge weapons have reached the moon looking for Moraziel. The creature has no idea whether they got to the wizard. Some of them have been imprisoned, however, in a maze to the counterspinwise of this one.

(The what? That's what it's thinking -- the counterspinwise.)

It is said that it is virtually impossible to reach either Moraziel or the Mad One. However, if anyone on the moon has helpful information, it is probably the Librarian.

Wonder what else we can do with the Talisman?

Most Elements: A bolt of magic leaps from the Talisman and fries the creature. It's dead. Iggy looks a little green. Now what?

Air/Water: The creature chokes, falls to its knees, turns blue, and dies. It's dead. Iggy looks a little green. Now what?

Earth: The earthquake you expect does not occur. Perhaps Earth has no power, here on the Moon of Madness?

Spirit: The spirit of the creature is tormented. It lives a dreary, bureaucratic routine, unending drudgery in the service of the Mad One. It is perhaps a little mad itself.

Time: Time freezes. Nothing much happens for a while. Where does this get you? Time resumes.

I see. Doesn't appear that we're getting anything else out of him, so we may as well let him go.

It hurries off into the distance, and you continue to the spinwise.

The spin-what? What the hell is up with these directions? 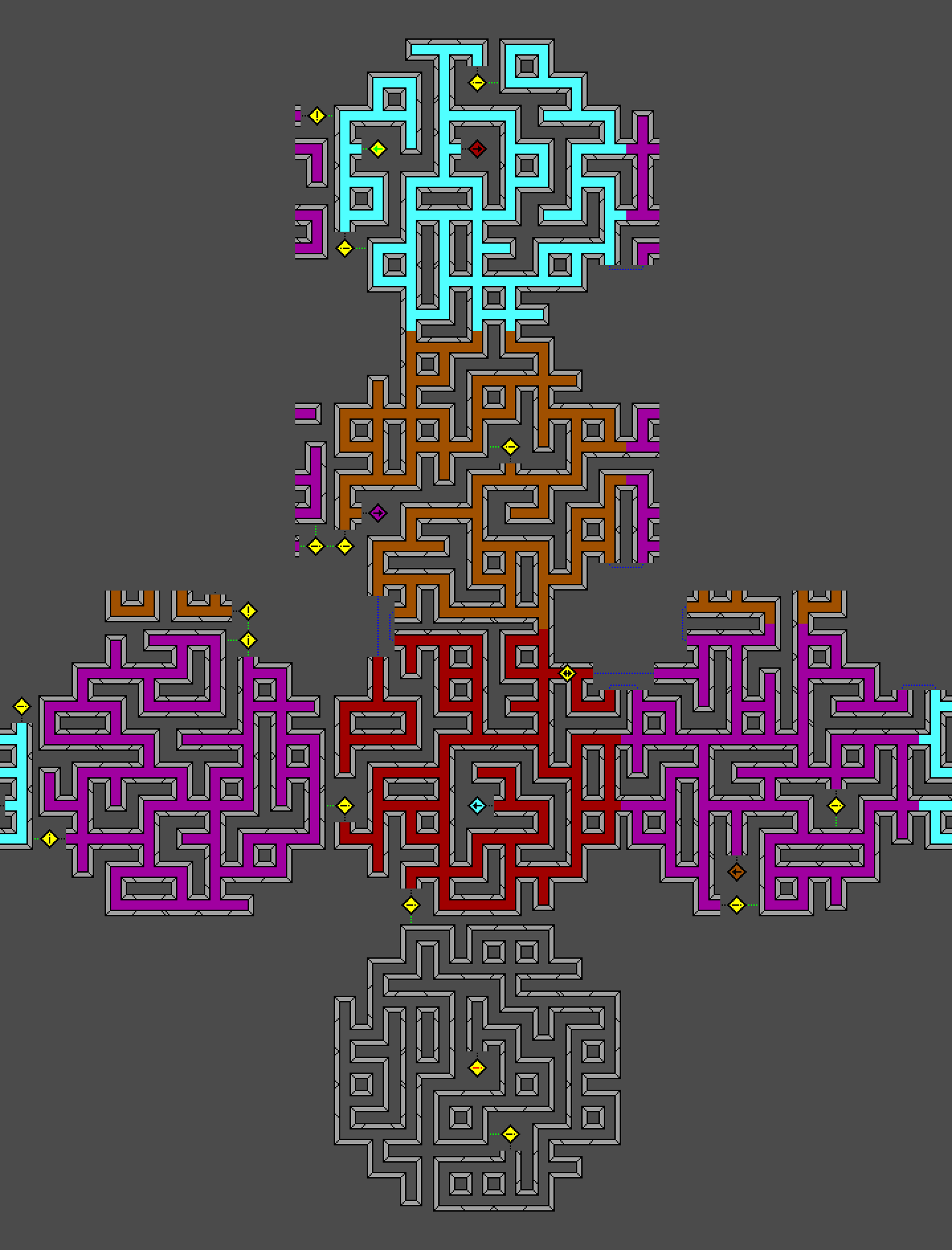 Welcome to the Moon of Madness, the final maze of MadMaze. As the unusual shape and overlapping borders might hint, this map is a sphere... or at least a funky cube. To get a proper feel for it, print out the map and wrap it around a tennis ball.

We started at the green ladder in the blue-floored section up top, and have just passed the PoP below to enter the larger part of the blue maze. Other than that, the entire maze is more or less interconnected, save for the gray segment; our destination, the Seat of Madness, is dead center of that maze. In theory, we can walk straight to that PoP in the red maze and pass through it, but there's doubtless some crucial information we'll need from the many PoPs scattered about.

Directions on the moon are different; instead of north/south and east/west, we have polar/counterpolar and spinwise/counterspinwise. I've already oriented the map such that polar is up and spinwise is right; for all the good that does understanding anything.

To make things a bit easier, ladders connect each side of the maze to another side, which I've color-coded as best I can. The red ladder in the blue-floored maze would take us to the blue ladder in the red-floored maze, for instance. It's never necessary to take a ladder, but it can speed things up a bit.

There's one other PoP here in the blue maze. That weird alien mentioned something about a library?

Your guess is as good as mine.

Before trying anything, let's do a group huddle.

"What the hell," whispers Iggy. "Let's chance a few questions."

The Talisman seems to be out of sorts today; there are no bass voices, no sense of magic power.

I don't suppose you know anything about the layout of the Moon of Madness, Mr. Librarian?

"I wouldn't know," says the Librarian briskly. "I never leave here. I have no idea what changes have been made to the moon since I was a lad, and that was many moons ago." It chuckles to itself. "You might try the map room," it suggests helpfully.

That'll work. Where is the map room?

"May I see your library card please?" says the librarian.

Uh. We don't have a library card.

Let's try a different tack. Know anything about Moraziel?

"Mmm, Moraziel, Moraziel," says the librarian to itself. "Yes, I believe we have a volume written by a Moraziel. Would that be of interest?" You assure the Librarian that it would.

"May I see your library card please?"

Iggy's idea is a good one, but alas, there is a puzzle attached to this to prevent us from simply bluffing our way through. We'll have to go exploring a bit and see if we can't find that Bureau of Records.

We can of course easily kill the creature, either with the Talisman or Valterre.

You leap toward the creature and swipe Valterre from its scabbard. Gish! The thing has fuschia blood. It's dead. Iggy looks a little green. Now what?

Once he's dead, we can rifle through his belongings.

We can also use the Talisman before talking to the creature, which produces some different results. We can still murder him, of course, but the others are changed slightly:

Earth: The earthquake you expect does not occur. Perhaps this celestial body does not qualify as "earth?"

Mind: The creature's mind is preoccupied with its troubles. It overslept this morning, and its supervisor will not be pleased. Its pay will be docked, meaning that it may not be able to meet the rent on its living quarters. These worries overshadow everything else; you can read nothing more from its mind.

More interesting is Time, which grants us a number of options:

Search It: It is carrying a staff, a quill and a bottle of ink, but nothing else of any interest. Time unfreezes. The alien runs into you. "Hey! Watch where you're going, you big galoot."

Tie It Up: Time unfreezes. Momentum resumes, and the hurrying creature hurtles to the ground in its awkward bonds. It is stunned, then begins to struggle. "Hey! Let me out of here!" "Gladly," you say, "if you help me first." "Throckmorton's gonna kill me," moans the creature. "What do you want?"

Nothing all that different from merely threatening it, but it lets us search him without resorting to murder.

Speaking of resorting to murder, we can kill the Librarian.

It dies. Its blood is magenta. Iggy eyes you worriedly.

Alas, without his help, the library is of absolutely no use to us:

This must be a big library if we can't even find a map room on our own.